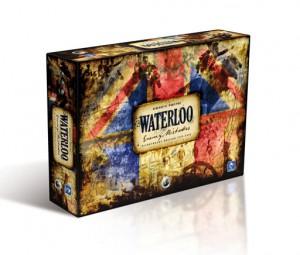 Never interrupt your enemy when he is making a mistake.
– Napoleone Bonaparte

Due to the great interest we will show you some advance information about the new board game of the Pendragon Game Studios, Italy. In Essen we will present the English edition.

Waterloo: Enemy Mistakes™ is a strategic game about the immense last battle of Napoleon Bonaparte that forever changed the destiny of modern Europe.

Waterloo: Enemy Mistakes™ recreates, on the occasion the bicentenary of the battle, the clash between the British lineup, helped along by the Prussian army, and the French one. The players identify themselves with the Commanders of the armies: in two players one leads the Duke of Wellington, in opposition to Napoleon Bonaparte. To complete the main scenery there will be, eventually, a third player in representation of the fieldmarshal Gebhard Leberecht von Blücher, leader of the Prussian.